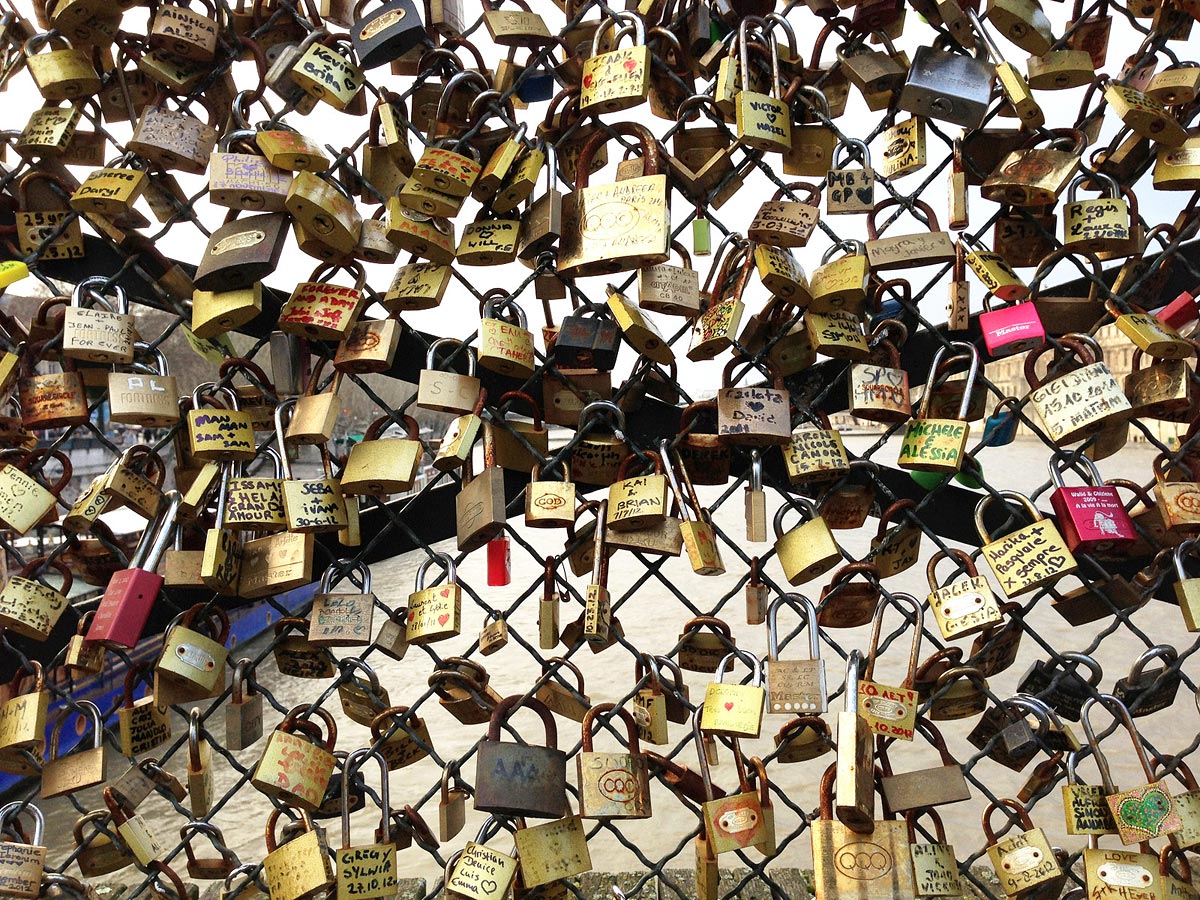 As we walked over Pont des Arts on our way from the Louvre, as many of Paris’s 27 mm tourists do each year, we stopped to survey the infamous "love locks", the padlock vendors, and our fellow tourists taking pictures and locking thier own to the bridge.

"How did this get started?", we asked.

Surprisingly, it’s a rather new custom.

The pedestrian bridge Pont des Arts has been a favorite of Parisians and tourists since it was built in the early 1800s, and its scenic locale makes it an oft-visited location photographers, painters, students, and picnicers.

The "lock-their-love-to-the-bridge-throw-the-key-into-the-Seine" ritual for tourist couples only started in Paris around 2008. One theory is that it was inspired by a scene from Fernando Moccia’s book “I Want You”, where the main characters sealed their relationship by locking a padlock to a lamppost on Ponte Milvio in Rome and then throwing the key into the river. In 2006, thousands of Italians copied the gesture, causing the lamppost to collapse under the weight. While examples of love padlocks pop up earlier in the 1900s in Serbia, Hungary and other European countries, love padlocks may originate from China:

The other theory originates in China where padlocks blanket every metal pole and fence of Mount Huang, also known as the Yellow Mountain in Huángshān. It is the custom for couples to “lock their souls together” and then throw the key into the valleys of mist. However, breaking up is a little more complicated: the only way to release your souls is to find the key and unlock the appropriate padlock.

Wherever they originated, the custom has spread around the world, including London, Stocklholm, Seoul, Tokyo, Montevideo, Melbourne, Belfast, and well over a 100 other cities, even Kodiak, Alaska.

However, not everybody’s happy about them. In most places where love padlocks have popped up, they’ve created some conflict between romantic lovers, locals, and practical government officials. For many cities, the padlocks are viewed as a threat to public safety, as the weight of padlocks threaten collapsing fences, bridges and structures, and may bring visitors to places not prepared for a mass of visitors.

On the practical side, many locals consider the padlocks to be an eyesore and an invasion of tourist sensibilities into Parisian life; in fact, Parisian tradition is for couples to carve their names into the trees along the Seine. More than eyesore, many city officials worry about the padlocks causing the fencing and parapets on the bridge to sag, creating the danger that fragments of the bridge could collapse, bringing several kilos of padlocks to drop into the boats and cruises on the River Seine.

On the romantic side, many Parisians feel it’s an abhorent idea that the locks could represent love:

“The fools! They haven’t understood a thing about love, have they?” was the conclusion recently of a 23-year-old waiter at Panis, a cafe on the Left Bank with a view over Notre-Dame. At the heart of love à la française lies the idea of freedom. To love truly is to want the other free, and this includes the freedom to walk away. Love is not about possession or property. Love is no prison where two people are each other’s slaves. Love is not a commodity, either. Love is not capitalist, it is revolutionary. If anything, true love shows you the way to selflessness.

In 2010, all the padlocks on Pont des Arts disappeared one night, for reasons never fully understood. Some think it was the city government, but they never admitted to cutting the locks down, while others think that theives stole the locks to melt them down and sell the scrap metal. Regardless of how they disappeared, the bridge quickly filled up with locks as the tradition continued unabated. Vendors continue to sell padlocks and markers near the bridge, in case the lovers are inspired to spontaneously lock their love away to Paris. Of course, one must pay attention to which bridge they use:

“There are two bridges in Paris with the locks, you must be very careful which bridge you put your lock on because Pont des Arts is for your committed love, while Pont de l’Archevêché is for your lover.”

The Paris city government has yet to make an official declaration as to the future of the love padlocks, but for now, they are a part of the fabric of the city, for better or worse.