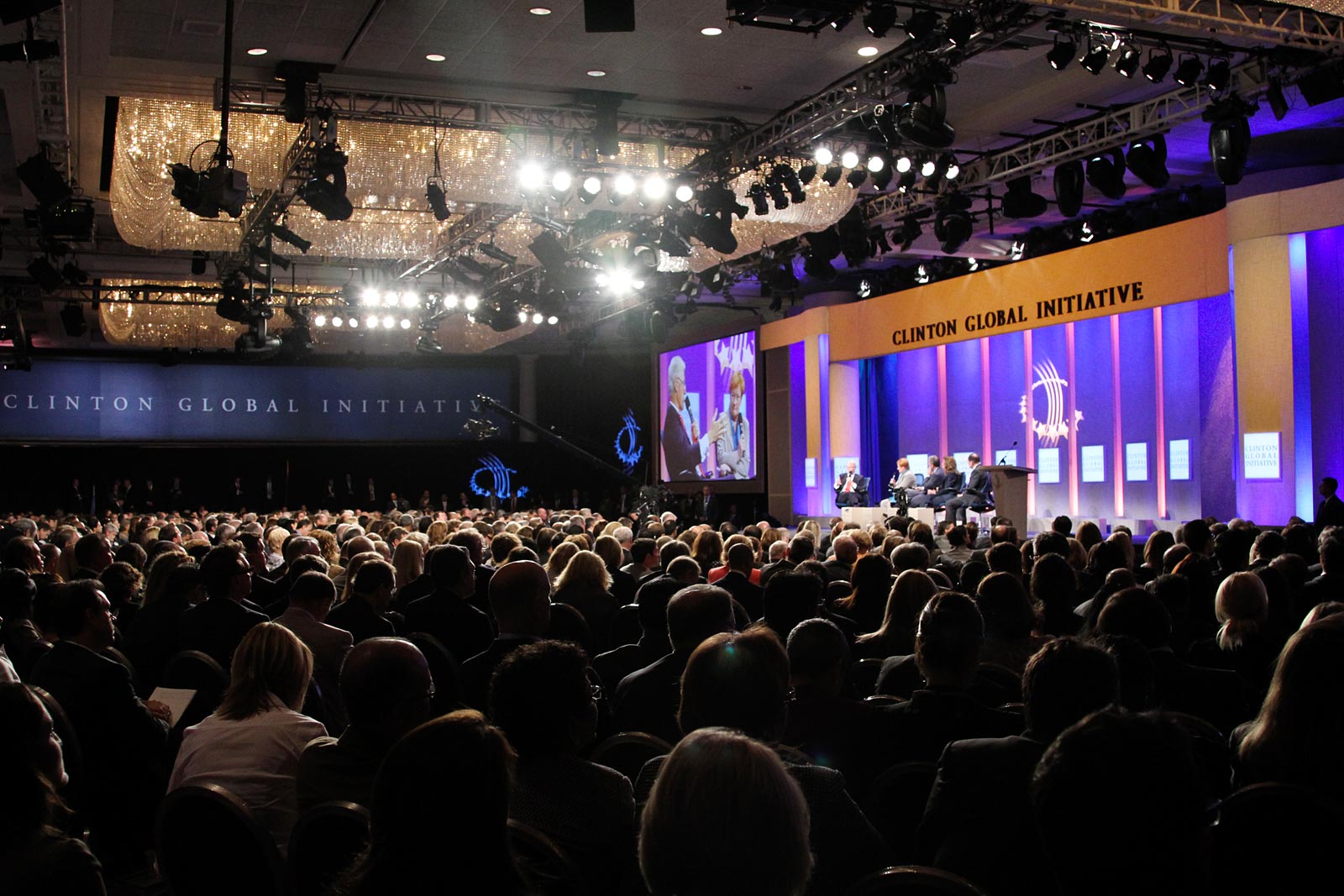 President Bill Clinton, talking to the attendees of Clinton Global Initiative 2013 at the closing plenary:

The Clinton Global Initiative (CGI) was founded in 2005 by Bill Clinton as a non-partisan organization to bring together global leaders to enact global change. During each Annual Meeting, members, which include NGOs, corporations, government leaders and more, make Commitments to Action, specific plans for their organizations to bring a change to the world that generally fit within one of CGI’s focus areas. The commitments must be new, specific and measurable, and CGI follows up and monitors progress and the success of the commitments over time.

The funding and management of the commitments come from the organizations themselves, and not CGI, and that marks an important distinction about CGI: CGI does not grant money or directly manage projects, but works to focus global attention on important causes and bring members together to share ideas, build relationships, and make (and report back on) specific, measurable commitments to change.

While most of the attendees at CGI are heads of state, heads of NGO, CEOs, social entrepreneurs, and other social innovation leaders, for the last four years I’ve been one of the few technology venture capitalists to attend.* With that perspective, I wanted to share five key insights from my experiences at CGI.

At CGI, I attend over 20 panels each year around a variety of subjects, from improving healthcare to access to education to philanthropy and innovation to women and girls and more. The conversations cover big topics like improving the lives of women and girls, building public-private partnerships to affect change, building sustainable cities, building for the bottom of the pyramid, and many more, all pulled together by CGI’s focus areas and annual theme.

Underneath the grand goals around big areas of change lie smaller, specific plans. Each member has a project tied to a country, an issue, a region, a city, around a specific type of change they are trying to accomplish. But they all have big stories to tell about their projects and the impact they are going to have. Big stories, specific missions.

This relationship between CGI and its members is similar to the investor / entrepreneur dynamic. Entrepreneurs create the specific missions by tackling discrete problems with specific solutions that have the potential to scale, and investors tie those specific missions into the big stories through their investment theses and their portfolio of investments.

Beyond providing a platform to make commitments, CGI also tracks, monitors, and reports back on the progress and success of commitments. Most of the commitments are multiple-year plans to invest some millions of dollars towards some goal in some country. Obviously, tracking back to see if the commitment was carried out is an important component to the CGI platform.

But the tools to report and communicate on that progress are raw. CGI is making moves towards better transparency, but could benefit from a better platform to open up the data around the performance of commitments. For technology entrepreneurs and investors, Crunchbase and Dashboard are invaluable data sources and tools to help investors and entrepreneurs get better access to information about funding, people, and performance. We’ve seen what happens when governments open up access to civic data, where’s the analog to nonprofits and social innovation? The issue isn’t merely one of transparency and accountability, but providing better access to information opens up access to new participants, new ideas, and new innovations.

3. CGI leads syndicates of investors with press and attention instead of investment dollars.

If you’ve read anything about venture capital in the past week or month you’ve probably heard about Angellist and their launch of Syndicates, a platform for angel investors to lead or follow other angel investors in early-stage technology investments. It’s important to note that the idea of syndicating investments is not new, as investors have been pulling together groups of investors to make investments together for years. But Syndicates creates a new platform to make the syndication process easier, quicker, and potentially better.

I see CGI as a lead investor that creates syndicates of investors around CGI’s action areas. While CGI does not commit its own capital, CGI commits enormous brand recognition, name, PR, and press support to participating organizations that make commitments (i.e. “investments”) in CGI’s primary action areas. And for many of the member organizations, that press, PR, and support can be an enormous benefit and key to their efforts, and just as powerful as money.

4. Impact investing could be very suited to equity crowdfunding and an Angellist Syndicate approach.

Impact investing focuses on investing in companies and organizations with the intention to generate social and environmental returns alongside financial returns. It’s long been a step-cousin to traditional venture capital and private equity investing, which has been focused on financial returns above all else. I’ve long argued that “doing good is good business”, and that a social meaning and mission can be a key differentiator for a company, and we’ve seen recent examples of venture capital flowing into businesses with a larger cause.

5. It’s the makers that matter.

At the end of the day, it’s still the makers that matter most. Listening to the stories of entrepreneurs and instigators that have worked on causes for years and decades with little support or recognition is inspiring. When we listen to people’s stories, read about history, or look back at any sweeping changes, it’s too easy to skip past the day-to-day toil that’s involved along the way. Imagine listening to the story of an entrepreneur that’s been working on environmental reform in Africa for 15 years, or women’s education for 20 years, or any deep-rooted social issue. They may get the headlines now, but they’ve been focusing on the trendlines for years before.

The star of this year’s CGI for me was Malala, the young Pakistani activist and advocate for equal education for girls. In 2009 she started writing an anonymous blog about the lives of women and girls in a Taliban-controlled province of Pakistan, often noting how the Taliban bans women and girls from education and heavily restricts their rights. In October 2011, she was shot in the head and neck by the Taliban in an assassination attempt, but survived, and has since become a spark and activist towards the treatment of women and girls around the world. In 2013, Time named her one of the most influential people in the world and she was nominated for a Nobel Peace Prize.

Her passion, fire, youth, and work to date draws her a lot of attention, but it’s important to note that her father deserves a tremendous amount of recognition for his support and devotion. Her father educated her, supported her efforts in speaking out, and dedicated a lot of time and passion into her political awareness and activism. He took her to a press club meeting in 2008 to talk publicly about girls’ right to education, and kept supporting her efforts to educate herself and speak out about the Taliban’s suppression of women and girls.

And that’s something that all successful startups have: the ultimate success of a company is not just about the the founder, CEO, or the executives in the press, but about the teams behind the scenes that don’t get the public glory, but make the engines run. While she deserves every ounce of credit she gets, Malala couldn’t have been who she is today without her father.

Clinton Global Initiative celebrates the challenges and successes of makers like Malala and her father. We can talk about commitments, foundations, investors, and venture capitalists as much as we want, but the true innovation in the world comes from the makers, entrepreneurs, social entrepreneurs, instigators, and leaders. Clinton Global Initiative is a still a place where makers matter most, and that’s why it matters.

In full disclosure, I have attended CGI the last four years as a photographer, part of my overlap of professional interests. See selected images of mine from CGI 2010 — 2013 on Flickr.