A story about a zombie’s early morning flight from New Orleans to San Francisco.
by Taylor Davidson · Nov 3rd, 2009

At TribeCon 2009 in New Orleans last week I got to participate in a panel discussion about how to embrace making yourself uncomfortable for personal and professional growth.

Little did I know I would get to put the idea to use just a couple days later.

When I originally planned out my travel schedule for this fall, I booked my flight from New Orleans to San Francisco on the only reasonably-priced flight I could find, a 7 AM departure on the Sunday morning after Halloween. As I booked the ticket, I knew very well that I was also planning on either spending the night at the airport or going straight to the airport from a rollicking good time.

What I hadn’t planned on:

But that’s why it was so fun, freeing and powerful.

First off, an important point: I’m an unquestioned introvert, and I’m not an exhibitionist. I’ve never liked Halloween; I’ve always loved to see the creativity and costumes, but I’ve never wanted to participate. I’ve skipped many Halloween parties, and taken a general pass on the holiday throughout my life. I can’t remember a single good costume I’ve worn over the years. I was a face-paint virgin.

But, when friends Sloane and Kyle jumped right in to get their faces painted as zombies at the festival, despite a bit of reluctance, it seemed like a good opportunity to try something new.

Without feeling physically different, I initially felt emotionally different, a little self-conscious, even if everyone else was doing it. I showed pictures from my camera of what I looked like without the face paint. But the feeling faded, and as the night continued at the festival and deeper into the New Orleans nightlife, I forgot about it.

And thus, helped by a little liquid courage, when Kyle and Sloane offered to drive me to the airport at 5 AM to catch my flight, on the condition that I kept the zombie face paint on for my flights to Houston and San Francisco that morning, it wasn’t even a decision. Of course I would. 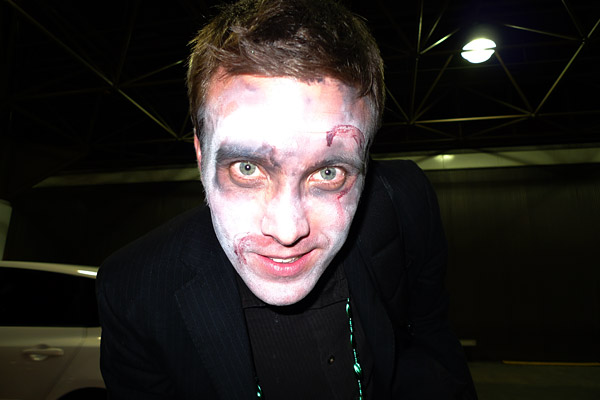 Would you let a friend board a plane looking like this? 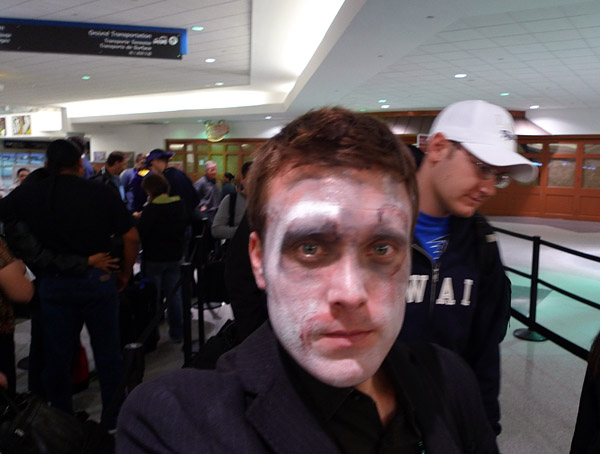 Waiting to go through security, worried a little bit about whether security will let me through without taking off the face paint, an unfounded concern as it turned out.

Getting ready to go through security at MSY (ping @feelgoodz @sloane) http://flic.kr/p/7c4tBV (tweet)

photo a guaranteed conversation starter, getting ready to board flight http://flic.kr/p/7c8t9N (tweet) 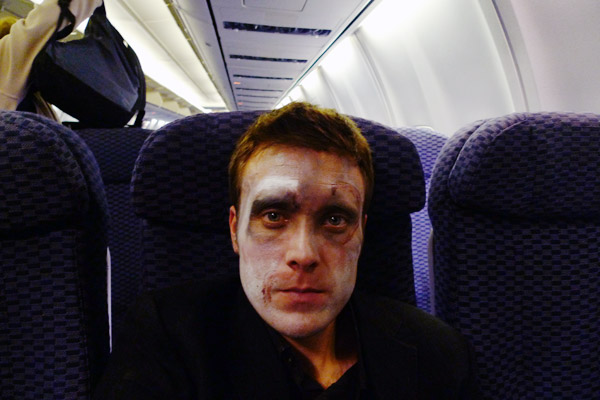 On board the first flight from New Orleans to Houston

On board the plane from New Orleans to Houston, around 6:45 AM. As it turned out, I sat in the front row, at the entrance to the plane, enjoying the many looks from people getting on. Looks, smiles, quick glances, but no comments.

Taking a bit of #Voodoo and a NOLA Halloween on my flight (cc @feelgoodz @sloane) http://flic.kr/p/7c8A6u (tweet) 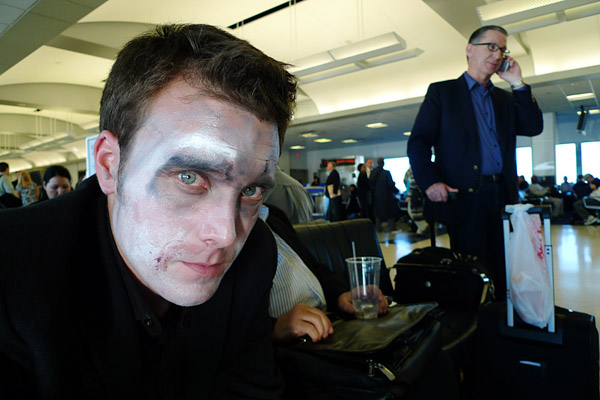 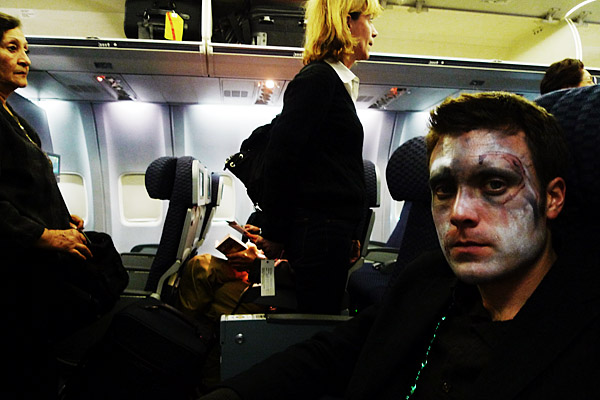 On board the second flight from Houston to San Francisco 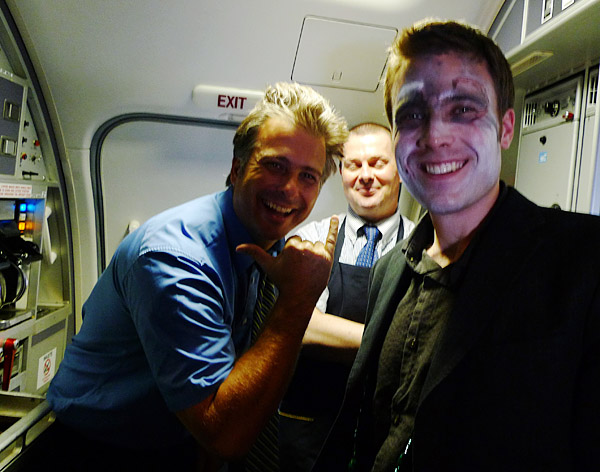 On board the second flight from Houston to San Francisco

Hanging with the airplane staff on the second flight from Houston to San Francisco. 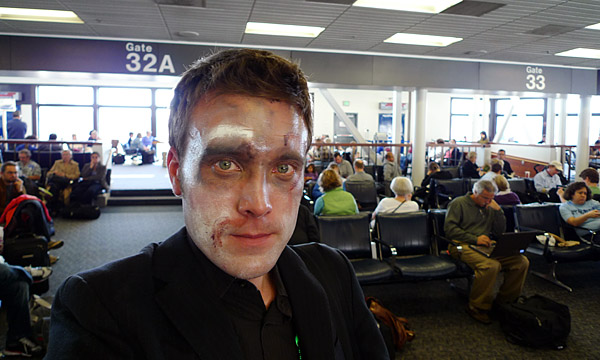 Arrived, a deal completed, at San Francisco International Airport, around 11 AM local time.

Once I arrived and took a couple pictures, I washed off the face paint the men’s bathroom. Interestingly, a couple guys came up to me and said they had flown the same route and had noticed me get on the planes in New Orleans and Houston and had been betting why I was in face paint, but hadn’t asked me.

But instead of waiting for people to ask, I embraced this as an opportunity to start a lot of conversations. I converted many glances and quick smiles into conversations and laughs, simply by reaching out to people and explaining a little bit about why I was dressed in muddy shoes, a blazer and silver Zombie face paint that morning. Simply by being a little uncomfortable, by being willing to make a fool of myself, I hope I brought a little bit of joy to everyone that day: to everyone that saw me but didn’t say anything, to everyone I talked to and laughed with that morning and hopefully to everyone that followed the story on Twitter around the world.

Would I do it again? If the opportunity presented itself, yes. Would I plan to do it? No.

Why the difference? Because the joy was in running with the moment, with accepting the opportunity, to embracing the simple fun involved with carrying an in-context joy to an out-of-context oddity, to creating an unexpected experience and story for us all to enjoy.

The lesson? Being different usually isn’t the plunge we think it is; instead of shying away from trying something new or standing out, embrace the opportunity for yourself and for others. Being “a human in public” both online and offline is a fantastic way to connect with people and build real relationships, whether they exist only in the moment or forever.

And I couldn’t have done it without you.

Thanks to Sloane, Kyle and Andrew and the rest of the New Orleans community for showing me a truly great time and helping create a story for all of us to share. I’ll see you all again soon.

All the pictures above on Flickr, A Zombie’s Journey.