Airports bring out a range of emotions, from dismay, bittersweetness, or sheer joy in arriving or departing. Confusion, anger, relief, any emotion marking one’s passage.

Arriving in Puerto Vallarta was nothing but excitement. Excited about the next couple weeks, excited to be meeting friends, excited about doing a lot and doing nothing.

No bags checked, wide awake, hotel already booked (not a typical course of planning for me), just step off the plane, clear customs, all I had to do was get some pesos, get to my hotel, and relax.

The ubiquitousness of big banks and ATMs has made getting local money a relatively painless task almost anywhere in the world. But while the means of transportation (taxi, bus, boat, etc.) are relatively similar around the world, using them can be quite different.

As usual, whereas most people were either picked up by loved ones, yet-to-be-loved ones carrying big cards with their names, resort buses and greeters, or dived into the taxi touts, I turned the other direction to figure out the scene. Armed with a map and some pre-trip research, I stepped outside the terminal to catch a local bus. 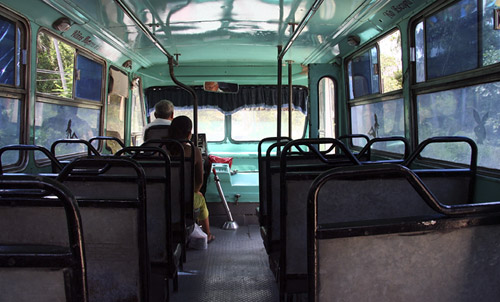 Why a local bus? Why not? After saying no to the numerous taxi touts, and wanting to try something different, the local bus seemed the hardest, least comprehensible, but also most fun and cheapest route.

After a little wandering, I get to what seems like a bus stop, marked by people getting on and off different buses stopping, rather than any formal signage. With a decent understanding of the city layout and the possible routes, I figure out which bus I need to catch, wait, and hop on the next one that appears to be my route, pay the driver the 5 pesos, and walk down the aisle.

Stares do not bother me, they are normal around the world when you enter an area, a bar, a restaurant, a world away from the typical tourist zones and invade the locals’ life. No worries – just smile, be happy, good things will happen.

Blissfully happy to be in Mexico, to be on a rickety bus, to be bouncing through Mexico, on my way to the beach, relaxation, good times. I stand in the aisle, and as people come and go I am able to get a seat.

Large roads, small roads, stores, shops, houses, people lingering, waiting, running and shouting all bounce past. Trying to figure out where we are, I look for trends, for turns, to try to geta sense of direction and place on the route.

More people get off than get on. Roads are getting smaller. We are going uphill, not downhill towards the sea. I start to think about the places written on the front of the bus to indicate the route (painted on the windshield in a haphazard script, by the way).

The bus turns up a small road, comes to a stop. The last three or four people get off. The bus turns off. The bus driver gets up, looks at me, and gets off the bus. Dead quiet, sitting in a small square, nothing around. Hmm.

And of course my Spanish is “very limited” to please, thank you, sorry and how much. None of which seems to be useful in this situation.

I pull out my map, and after some thought, retracing the route I think we took and comparing all of that with the places written on the bus windshield, I note the success and failure that led to me being the only person sitting on a non-moving bus in the middle of nowhere.

I got on the right route. But in the opposite direction. Instead of being at the ending terminus close to my intended destination, I am now sitting at the other end, in a small square in a small town outside Puerto Vallarta.

Not bad, really. Eventually the bus will start again and continue the other way. Right?

I get up, walk down the bus, peer out to see where the bus driver went. Nowhere to be found. There are, however, a couple of other people looking at me with a cross between boredom and bemusement. “Stupid gringo”, I imagine them thinking. Which is partially correct.

After a couple of minutes of shared bemusement from by them and me, a new person gets on the bus, begins to fiddle with the controls, fills up a water jug, and turns on the bus, starting back down the route. All the placemarkers, stores, restaurants, roads and people return, just in the opposite direction. Past the airport, now sure of my original mistake and comfortable that I am going the correct way, a little wave of relief passes over me.

Of course, I am still not completely sure where to get off, but the confidence in unshaken. Sometimes the fun in travel is not knowing exactly where you are.

Lesson: Get on the bus. But ask questions first.